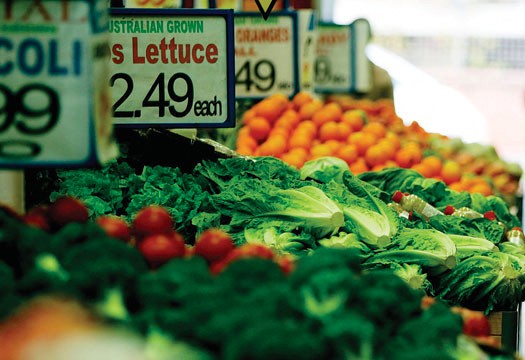 The producer price index, which measures the cost of goods and services before they reach the consumer, dropped 0.2 percent last month, the Labor Department said Friday. The decline was driven lower by cheaper food and gas, and follows two months of strong gains that had suggested inflation might be perking up after being dormant for two years.

In the past 12 months, producer prices have risen 2 percent, matching the Federal Reserve's inflation target. That's down from an annual gain of 2.1 percent in April.

"The underlying details of the report suggest that producer price inflation is still fairly contained despite the big increases in the last few months," Omair Sharif, an economist at RBS Securities, said in a research note.

Excluding the volatile food, energy and profit margin categories, core producer prices were unchanged in May. The result comes after a 0.3 percent gain in each of the two preceding months. Core prices have risen 2 percent in the past year.

The drop in profit margins comes after robust increases in April and March. Retailer and wholesaler profit margins had fallen in the winter as companies rolled out discounts to lure shoppers through the doors during harsh winter storms.

Wholesale prices rose 0.6 percent in April and 0.5 percent in May. Some of those increases have been passed onto consumers. The consumer price index, the most widely followed inflation measure, rose 2 percent in April compared with 12 months earlier. That was the largest yearly increase since July.

The Federal Reserve prefers inflation at about 2 percent as a guard against deflation, which occurs when prices actually fall. Deflation can also drag down wages and typically leads to recessions.

Inflation, as measured by the consumer price index, has been mostly below 2 percent for the past two years.

Consumers may like low prices, but weak inflation also occurs when the economy is sluggish. Wage growth has been meager for the past four years, and unemployment remains at historically high levels. That limits consumer spending and makes it harder for businesses to raise prices.

Still, low inflation has enabled the Fed to pursue extraordinary stimulus programs to try and boost the economy. It has begun to unwind some of that stimulus, cutting its monthly bond purchases to $45 billion from $85 billion last year.

The bond purchases, intended to lower long-term interest rates, are expected to be trimmed by another $10 billion when Fed officials meet again next week.