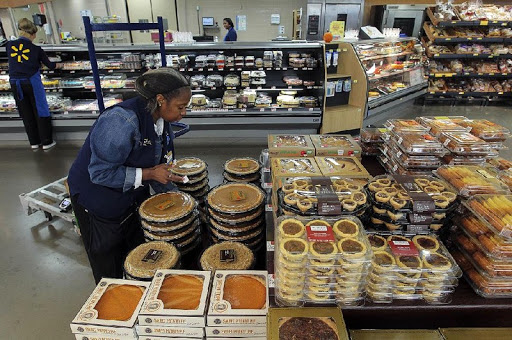 Bakery goods take up a fraction of the total floor space at a typical 180,000-square-foot Wal-Mart Supercenter.

At store No. 4460 in North Little Rock, the department employs 15 people, which equates to about 5 percent of the average workforce needed to operate one of Wal-Mart's large-format stores.

Still, the bakery is viewed by store managers like Naomi York as arguably the most important part of shaping a customer's first impression during a trip to the grocery store.

"Bakery sets the tone," said York, who manages the supercenter at 12001 Maumelle Blvd. in North Little Rock. "Being on top of bakery making a good impression is important. Bakery is the first thing you see when you visit my store."

The bakery is included in the "fresh" category that has been deemed a critical part of Wal-Mart's efforts to lure more shoppers into its stores. Improvements in fresh groceries, which include meat, dairy and delicatessen offerings, were among the urgent agenda items outlined by Wal-Mart U.S. CEO Greg Foran.

Foran noted in an October investor presentation that same-store sales for the fresh category are up 1.5 percent from last year. It is a trend that he hopes to continue as Wal-Mart works to improve the overall shopping experience for customers.

Improving the bakery has been part of the ongoing efforts.

Industry reports estimate that the in-store bakery-goods market is worth about $13 billion annually. Wal-Mart doesn't divulge category-specific sales figures but has routinely noted the importance of its fresh products in its grocery business, which accounts for about 56 percent of sales in the U.S.

A report on marketing bakery items issued by the International Dairy Deli Bakery Association highlights just how fierce the competition is for customers' spending on bread, cookies, cakes and other baked goods. Not only are grocers and retailers fighting against one another, they have to worry about independent bakeries, plus baked goods offered by national restaurant and coffee chains.

"A lot is at stake," the report reads. "Successful deli and bakery departments are traffic-generators, so growing these departments is good for the entire enterprise -- and shoppers are shopping around. More than a third of each store's primary shoppers actually prefer to go to another store to do their bakery and deli shopping."

Wal-Mart, like other grocers, is looking for ways to keep that 33 percent of shoppers from going elsewhere.

Part of the strategy for Wal-Mart, which will sell an estimated 100 million cupcakes between October and Valentine's Day, is to focus on the core products of its bakery operation, Baldwin said.

Wal-Mart estimates that 80 percent of its bakery business is focused on cookies, cakes and breads. Those are items that can be produced in-house, and Baldwin said the retailer recognizes the importance of getting "really good at the core. That's where you're seeing our strength."

Sales growth in recent months is "north of double-digits," Baldwin said. York said her store has seen "significant" increases in sales this year, but she declined to give a specific percentage increase.

This time of year can provide a sales bump with Thanksgiving and Christmas coming. Roughly 15 percent of in-store bakery sales occur in the month between the two holidays, according to bakemag.com.

A review of products offered has been conducted, yielding what Baldwin said is improved merchandise. The filling in an apple pie sold by Wal-Mart last year included only about 31 percent fruit, compared with 70 percent today.

Increasing the types of products made in-house has also been a focus. Millennial shoppers -- those between ages 18 and 34 -- value stores that "showcase whole grains, authentic, local and fresh baked items," according to the International Dairy Deli Bakery Association.

Work has been done to make products, especially those made in-house, easier to find. Across the country, Wal-Mart is looking for ways to improve customers' ability to see from one end of the store to the other, and is tweaking packaging and displays.

Baldwin notes that the retailer has been able to make changes that customers notice because of changes that shoppers will never see. Tweaks in the back of the bakery have given employees more time to devote to baking and customers.

Working with a cookie dough supplier helped Wal-Mart decrease the amount to time spent transferring dough to baking sheets. While it shaved just a few minutes off the process for individual employees, the time saved adds up across the retailer's 5,000-plus stores.

Labeling is now color-coded based on category. That makes identifying merchandise more efficient for bakery staff members, freeing them up to spend more time either baking or with customers.

About 100 bakery specialists are employed by Wal-Mart now and deployed regionally to help stores with matters of quality or efficiency. York said her store is visited by the specialists once a week.

A hotline from store bakeries to the home office has been implemented for employees who have questions on days the specialist is not available.

"If we're better at preparing products and getting them from the backroom to the shelf in a better way, that's worth a lot of money to us," Baldwin said. "We can spend that time in other areas to make improvements and spend time with the customer. Really the whole magic to bakery is how much you produce in-house. You have to decide what you want to stand for that is house-made and prominently display it better than we have. We're doing that now. We're getting better."